Hi guys, James here with a sneak peek at the latest episode in the Sniper: Elite series – Released June 27th on all consoles, unless you live in North America, in which case you’ll have to wait until July first to receive it on your Xbox and PlayStation consoles, However, Sniper elite IS released on PC’s worldwide on June 27th  so to all you Americans who just can’t wait the extra 3 days for this awesome game, I hope you have a beefy computer to support it as it will be the only way to play until July!

Sniper Elite 3 is to be set in the conflict in Africa so will be in the time zone of 1942, three years before the first and second installments of this game were set.  seeing the player pitched into battles such as the siege of Tobruk and other key battles that took place in the countries of Northern Africa during the Second World War

Set in the beautiful scenery of Northern Africa, the player will have to adapt to fit the situation, from the open African plains and grasslands to steep sided valleys and rock formations and even to secret Nazi facilities

Equipped with Tiger tanks and the latest in weaponry, The German Afrika Korps has the Allied forces outnumbered and outgunned, BUT WAIT! IT GETS BETTER! Because now, intelligence has found out that the Nazis are creating a new super weapon that will effectively make the Allies lose the entire war and plan to use it, THAT, is where you come in.

The return of Karl Fairburne to the franchise,

The player will assume the role of  Karl Fairburne, an American OSS agent (And the protagonist in the last two games as well) on assignment to assist with intelligence efforts and provide his sharpshooting skills to the Allied Forces in Africa,

Karl Fairburne was raised in Berlin , he was the son of a U.S. ambassador to Germany, before the war broke out. He studied at West Point –  an American military academy located in New York, shortly after America’s entrance into the war in the December of 1941. One of the reasons he was chosen to be an OSS agent was from his high up family status in the American government; this was a common way of citizens being hired to join the OSS at the time so is our best bet.

Fairburne, being an OSS agent, is trained in close as well as ranged combat, in the last games, Fairburnes close quarter combat has been becoming more and more elaborate and animated, and this game is no exception, promising to be the most advanced for close quarters – But that’s not for this section – That’s for:

Expansive new environments – Stalk multi-route environments up to THREE times larger than levels seen in Sniper Elite V2, meaning you’ll never have to play a level the same way twice. (You know how it goes… walking around ho-hum same old.. Done this so many times before *looks left* hey… that’s new *finds super awesome hiding place that would have made level 2000% easier* *Manic rage*(Know what I mean?))

Adapt to any situation – Use stealth, distraction, sound masking and traps. Your approach. Your way. If things go hot, use the new ‘Relocate’ mechanic to slip into the shadows and find a new weakness in enemy lines.

New vehicle kill cam – Multi-stage destruction allows you to take out armoured cars, trucks and tanks piece-by-piece before delivering the final shot. See vehicles disintegrate in extreme amounts detail. Watch engines explode, ammunition crates ignite and for the giggles fire a bullet into the tanks driving compartment window for a ricochet shot around the inside of the tank

Revamped human X-ray kill cam – The acclaimed X-ray kill-cam is back and bolder than ever, including a detailed muscle layer, 3D mesh particles and a complete human circulatory system. 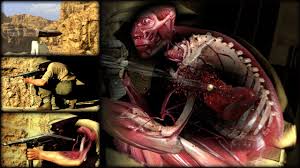 The x-ray killcam has been a mainstay in the Sniper Elite series, and this installment is no different, showing muscle layers, capillaries and even more vital organs than before.

Increased lethality – Karl is as effective up close n’ personal as he is at the safe end of a sniper rifle, with all new melee actions (Karl now has a knife, and an increased sense of “I’m a badass, get out of the way”), as well as a refined bullet mechanics system, so players are faced with even more challenging shots (Or easier – If you think you’re that good)

This website is DMCA Copyright protected and if you copy are posts ect we are illedged to take your website down! Although you don't need to copy! I am sure you have many creative Ideas! Thank you!